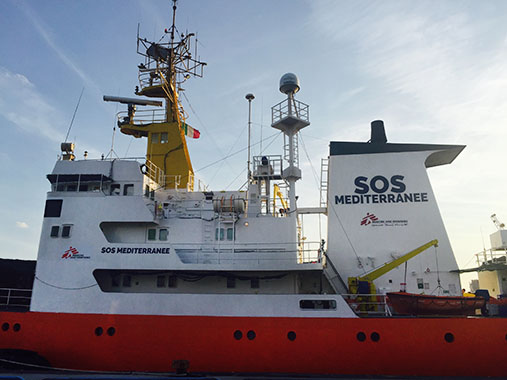 "Aquarius" was a fishery protection vessel until 2009. Now it is part of SOS Mediterranee, which rescue migrants in distress in the Mediterranean Sea. Photo: S. Plambech.

Catania, Italy, is one of the main ports receiving migrants crossing the Mediterranean Sea. More than 100 000 migrants have so far arrived by sea to Italy this year. Sine Plambech, researcher at the MIGMA – Transnationalism from above and below project, which explores European attempts to return Nigerian migrants, spent her summer in Catania, doing fieldwork among arriving migrants. According to Sine Plambech, the study of arrivals and the life changes migrants experience upon arrival is essential for discussing migration politics.

- We need to address the life and death events the migrants both have experienced on their journey, and also the trauma of migration, says Plambech. We also need to know about life and death and arrivals in order to understand why so few want to return back to Nigeria.

The vulnerability and special needs of pregnant migrants have lately received increased awareness by NGOs working with migrants in the Mediterranean. Migrant mothers with newborn babies are directed to special reception units, where they get social and health support and monitoring. The mothers also get a half year permit to stay, which is most often prolonged several times.

The fact that mothers with small children get these permissions to stay, have by a number of anti-immigration supporters been labelled as an intended strategy, and the children born by migrating parents have been called “anchor babies”. Sine Plambech finds this idea of “anchor babies” deeply questionable. According to Plambech, if this really is a “strategy”, the women quickly realize that it is a complicated one.

- The migrant women quickly realize that their life in Europe is more complicated when they have a baby. As mothers they also face specific kinds of both state and NGO controls and restrictions. For instance, they cannot leave Italy and they have to stay and take care of their baby. So even if having a baby allows them to stay in Europe, it limits both their mobility and their options when it comes to being able to get a job because of their migrant motherhood status, says Plambech.

Ending life at a Migrant Graveyard

The ships assigned for search and rescue operations in the Mediterranean bring back migrants to the port of Catania. Both dead and alive. The corpses are taken to the morgue in Catania, where they are searched for documents and personal belongings. Plambech tells that personal belongings are kept at an office in the city, in case family members would come and look for them. However, it is most unlikely that anyone will be able to trace their loved ones.

-Prospects of getting a visa to search for dead loved ones are slim for Nigerians. And if there should be other Nigerian family members already in Europe, then they would have to know from which port and on which ship that family member left Libya – and preferably also which ship they were rescued by. The saved personal belongings do not always help much either. Sometimes the saved personal belongings only consist of cloths. Imagine you only have pants and a t-skirt of a person, and the remains are buried without name and gender mentioned - how would you find them? Plambech asks.

In Catania you will also find a graveyard designed solely for migrants who have died while crossing the shores of the Mediterranean. The migrant graveyard was situated on the outskirts of the city. Only a monument build by the city of Catania to commemorate the dead migrants, could indicate that this was a place for migrants that recently had passed away. In contrast to the spectacle at the port, buzzling with migrants, NGO workers, journalists, researchers doctors, police, border control and so on, Plambech describes the graveyard as both a literal and metaphorical backspace of migration reception. The graveyard site being a space migrant stories are erased.

Plambech tells about a young Nigerian woman she met in Catania, who in many ways captures a dilemma many migrants face. The Nigerian woman had given birth to her baby only two weeks after arriving Italy. The father of the child had also migrated from Nigeria to Italy, although not on the same boat. Even though they were geographically close, both being in Italy, the father had still not been able to see them.

- They were to afraid that the connection between the two of them would be made, which they thought could jeopardize their chances for being allowed to stay.

In times of life changes, like the birth of a child or the loss of a loved one, the need for support of others is essential. For migrants, this is not possible. Due to the constant fear of being deported, migrants try to protect themselves by not revealing their names or personal details, which adds to the experience of migration as a form of solitude.

- The life and death events these migrants experience on their journey to Europe are important in understanding why so few want to return voluntarily, according to Plambech. Having so much vested in the journey makes it more than difficult to return.