DNA analysis has become a standard procedure in most police forces. Not only that - the techniques for producing forensic evidence have moved from test tubes, gel and dots on the screen to complex algorithms and biotechnologies that process biological information digitally. What happened during this shift? Mareile Kaufmann received a grant from the European Research Council to find answers. 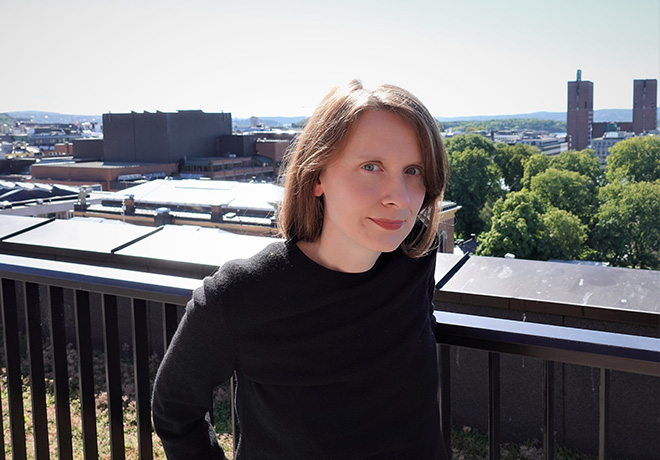 A decade ago, Norwegian police officers would only send DNA traces concerning serious crimes to the lab for analysis. Due to the “DNA-reform” in 2008, it is now common to send DNA from any crime scene to the lab. Lab equipment, however, is increasingly digitized. Having worked on digital matters before, Kaufmann asks what really happens when biology, technology and evidence meet? She will examine these meeting points in her new project “Digital DNA - The changing relationships between digital technologies, DNA and evidence”.

-We need to discuss the influence and politics of digital data in society more thoroughly, states Mareile Kaufmann. She works at the Department of Criminology and Sociology of Law and is one of the leading scholars on control cultures in digitized societies. Her background in Criminology, Sociology and Cultural Studies has led her to combine unconventional angles with strong empirics when she studies the role of technology in society.

-While research on technological advancements in forensic genetics have considered social, legal and ethical aspects of such innovations, they have not addressed the more fundamental ways in which these technologies shape evidence.The digital revolution in natural sciences is happening so fast that there is little time to reflect on technology’s role within scientific procedures. Humans, computers and software co-produce insights about DNA, along with new dilemmas and uncharted territories for science and police procedure. I will spend a lot of time in laboratories, computing facilities and with the police to find answers to these practical, but also existential questions, says Kaufmann.

Political, legal and societal actors also voice the need for this research. Last year, for example, the UK Science and Technology Select Committee expressed serious concerns about some forensic science fields and the ability to provide evidence.

-This marriage of technology and biology is not just a one-way street. I asked myself if there is any way in which DNA and evidence-based reasoning shape digital innovations in return. And there is! Not only have we begun to use DNA as a code for computing, a phenomenon I will take a closer look at. I will also address more fundamental questions: I am particularly interested in ways in which computational processes enjoy a status of being “neutral”. But we must not forget that they are also the product of human decision-making. My ERC project will continue exploring the relations between science and its status as unbiased and evident.

A most prestigious grant

The European Research Council (ERC) funds outstanding researchers and excellent ideas. ERC funding is among the most prestigious grants a researcher can receive. This is only the second time a scholar at the Department of Criminology and Sociology of Law (IKRS) has received this recognition.

Head of Department, May-Len Skilbrei, has followed the process from application to funding:

- I am very impressed by the dedication and the intellectual capacity of Mareile Kaufmann. I look forward to follow this project in the years to come, says Skilbrei, and adds that a large and innovative project like this will influence the scholarly development of both the department and criminology.

- I commend Mareile for the effort she has put into this, well knowing that she is at the right place at the right time to take part in setting an agenda for criminology’s engagement with technology.

IKRS is one of five Departments at the Faculty of Law at University of Oslo:

- We have a longstanding tradition – going back to the 1970s – to study technology and legal science. We are happy and proud that Mareile Kaufmann continues developing this research further and that our Faculty defines the State of the Art – not only nationally, but worldwide. I am sure that Kaufmann’s research will not only benefit Digital Criminology and Forensic Science, but that it will be an important contribution to our ongoing research on the relationship between law and technology, says Dean of the Faculty of Law, Ragnhild Hennum.

“Digital DNA - The changing relationships between digital technologies, DNA and evidence” is scheduled to start in 2021.