Access to knowledge in an age of surveillance capitalism

We are no longer using data services, but data services are using us. More so, internet companies advance into the intimate cores of ourselves, our homes, emotions, childhood, biology, excitement, empathy, curiosity, disease, our unconsciousness. 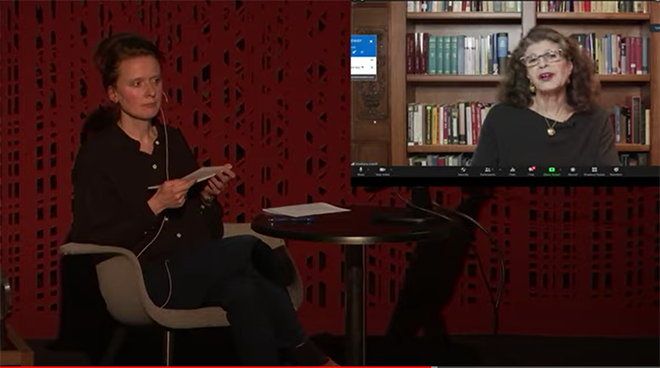 The practices of digital surveillance are spreading fast. Criminology plays a central role in analyzing these developments due to its history of studying surveillance and social control, says Mareile Kaufmann. Here in conversation with Shoshana Zuboff (online). Photo: Spartacus Forlag

On October 22nd the Norwegian translation of Shoshana Zuboffs “The Age of Surveillance Capitalism” was launched at Oslo’s House of Literature. Zuboffs work is the product of more than four decades of research into how the digital shapes human existence. Her book has been hailed by Zadie Smith as our generation's “Das Kapital/Capital”. Zuboff claims that we have entered a new period of capitalism that she coins “the age of surveillance capitalism”.

According to Zuboff the digital age really started in the year 2000. Back then, only 25% of the world information was stored in digital format. By the year 2007, the number was closer to 97%. In her book, she describes how companies such as Google, Twitter and Facebook, without our consent and knowledge harvest information about our online behavior that we provide these companies by using their “free” services. Private human experience is the main commodity in this new economy. Our experiences are turned into predictions about human behavior. Zuboff considers our data as raw material for global financial institutions that create our needs and shape our lives.

Zuboff argues that surveillance capitalism poses a threat to both our democratic institutions, as well as our personal freedom.

-    Research about “knowing capitalism”, the value of data and digital labor has grown stronger during the past decade, says Mareile Kaufmann.

-    Shoshana Zuboff is a pioneer when it comes to studying these developments. Her work on digitization began as early as in the 1980s. It is about time that such insights are seized by society at large. Almost no societal sector is exempt from the politics of data companies. Academia, too, is highly dependent on them: not only do universities present their achievements in terms of “clicks and likes”, but academics use products by digital companies and allow their data to be analyzed, too. Breaking this loop is incredibly difficult. Only when we understand the logics that steer digital developments can we begin to shape them in a way that keeps an adequate scope for human expression.

Mareile Kaufmann is a post-doctoral researcher at the Department of Criminology and Sociology of Law, UiO and a prize-winning voice in digital criminology. She hosted the conversation with Zuboff who was present online from Harvard.

The event was met with great interest and tickets sold out immediately. The conversation has been watched by over 1000 people and both, professionals and private persons acknowledged the importance of this research. Kaufmann mentions that

-    Before the event, representatives of different disciplines reached out to ensure our conversation would touch upon digitization within their sector – whether that’s public administration, education, health or other fields. Unfortunately, we could not talk about all these fields in depth, but this goes to show that the practices of digital surveillance are spreading fast. Criminology, here, plays a central role in analyzing these developments due to its history of studying surveillance and social control. Sociology of Law has a tradition of researching legal regulation, a field that Shoshana Zuboff sees as a solution for limiting surveillance capitalist practices.

A need for digital self-defense

Kaufmann’s research on dataveillance and algorithms also includes the many ways in which surveillance is met and questioned by different societal groups.

-    In closing her book, Prof. Zuboff calls everyone to action. Yet, her biggest hope and faith, I gather, lies in the legal domain, says Kaufmann.