Master of Laws Nertila Kuraj at the Deparment of Public and International Law will be defending the thesis: REACHing AN ENVIRONMENTAL REGULATION FOR NANOTECHNOLOGY. An analysis of REACH as an instrument for preventing and reducing the environmental impacts of nanomaterials for the degree of Ph.D. 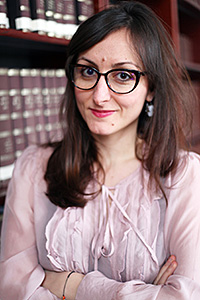 In 2006, the EU passed what it is considered to be “the most controversial and complex piece of regulation in European history”. The REACH Regulation sets forth the legal regime governing the Registration, Evaluation, Authorisation and Restriction of Chemicals, either on their own or in articles and preparations. The four phases of REACH each rest on a set of detailed legal and administrative provisions, which are tightly harnessed to and informed by the regulatory science in the area of chemicals legislation, that of Regulatory Toxicology. While the legal and administrative provisions are contained in the 235 pages and 141 Articles of the Regulation, the testing methodologies and technical requirements for data generation, in accordance with Regulatory Toxicology, make up for the remaining 614 pages of this massive 849-page flagship of EU chemical policy. To this almost-intimidatingly large official text of REACH, add the further 5000 pages of guidance documents produced by the European Chemicals Agency

By examining the legal status of nanoscale chemicals under the REACH Regulation, the study of this research work represents an analysis of REACH as an instrument for preventing and reducing the environmental impacts of nanomaterials.

Nanotechnology is considered to be the next technological revolution, which is about to radically affect the way we live and the environment we inhabit. Nano, from Greek dwarf, has become a buzzword in the last decade. The prefix (whose symbol is n), denotes a size range of 10-9​  or one billionth of a meter, generally designating materials/substances of the size between 1 and 100nm.

The trust placed on the revolutionary nature of nanotechnology and nanoscale chemicals is so great that they are considered to be a key enabling technology (KET), able to further the advancement of solutions to some of the most pressing global problems, ranging from effective medical treatments and clean-up of contaminated sites, to employment, technological progress, and increase of the general well-being. However, enthusiasm about the potentially infinite applications of nanotechnology is tempered by concerns related to the negative impacts and risks yet to be understood that come with the growing diffusion of man-made nanosubstances. This includes persistency and bioaccumulation in different environmental media and serious effect on human health. Whether nanotechnology is some sort of panacea for all the troubles that afflict modern life or, rather, a Pandora’s Box containing all the evils of the world, remains to be seen. The law is therefore called to regulate a Janus-faced technology, and to do so by striking the right balance between the acclaimed wonderful benefits and uncertain unprecedented risks that nanotechnology brings.

The European Commission seems to assume that the existing regulatory frameworks, including REACH, are adequate. This PhD seeks to scrutinize the validity of such an assumption by asking: Does REACH, as it currently stands, appropriately and exhaustively cover nanoscale substances so that high levels of human health and environmental protection are ensured also for this class of chemicals? With a clear distinction between regulatory coverage and regulatory adequacy in mind, this thesis examines the legal status of nanoscale chemicals under the REACH regulatory framework, which to date makes no mention whatsoever to nanotechnology and nanoscale substance. Given that REACH is a modern environmental law, the assessment of its effectiveness in regulating nanoscale chemicals is necessarily centred on the concept of risk in general, and the element of uncertainty in the specific. Put differently, the inquiry into the effectiveness of REACH’s provisions to offer high levels of protection against the human health and environmental risks of nanomaterials, is an inquiry into whether the risk regulation models delineated in REACH, can also be applied to highly uncertain nano-risks.

One of this thesis's arguments is that the mastering of the law alone is unlikely to provide any guidance for navigating and understating REACH’s complexity and its implications in terms of human health and environmental protection. This is the reason why delving into the science of toxicology that informs the REACH provisions was seen as a necessary and important step of this research work. Therefore, in order to answer the main research question on the effectiveness of REACH for tackling and curtailing nano-risks, the regulatory toxicology paradigms upon which the REACH norms rest, have been assessed. This way, the concept of “adequately controlled risk”, which is REACH’s benchmark of safety, actually means in the realm of toxicology. Far from being a purely scientific and a value-free endeavour, toxicology just like any other “exact” or “natural” science is a value-laden, highly subjective and, to some extent, a socially constructed activity. The use of safety factors, probabilistic models and sometimes sheer guesstimations are, this thesis contends, common practice in the assessment of chemicals’ toxicity.

This thesis concludes that the case of nano-chemicals risk denounces a structural problem of REACH: while the Regulation renovated the legal façade of chemicals legislation, a contextual overhaul of the upholding scientific platform of REACH, i.e. regulatory toxicology, did not take place with the review of the legal norms.
The final argument of this thesis advocates for radical precaution in the decision-making process concerning nano-risks in REACH and beyond, following what Hans Jonas called “the imperative of responsibility”.