Police Cooperation and Sovereignty in the EU. Norway’s Lessons for Europe

The State and the police are traditionally seen as closely connected phenomena. Today, however, rapid EU legal developments mean that European police forces are no longer tied to a specific national legal context or a specific territory in the way they used to be. 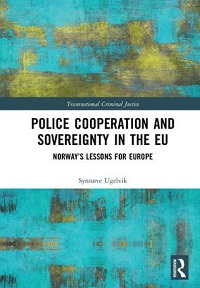 Norway is not a member of the EU. Or is it? This book shows that although it lacks formal membership status, Norway has become part of almost all of the major EU police cooperation measures and agreements. Not only does this mean that foreign police forces may operate on Norwegian territory and vice versa, but in addition, a wide range of EU regulations and cooperation instruments are incorporated directly into Norwegian law. With the increased focus on international and transnational police cooperation in mind, what does it mean to be a sovereign state in Europe today?

This book combines strong legal and theoretical analyses of a specific national system to show how this country is tied to and dependent on a wider international and supranational system of legal rules, technologies and concepts. This makes the book relevant not only for the Norwegian prosecution and police authorities, but also for readers outside Norway interested in exploring how and whether the police as a modern state function has changed through the implementation of international cross-border cooperation mechanisms.

Published by Routledge as part of the Transnational Criminal Justice series.

Read more about the book.