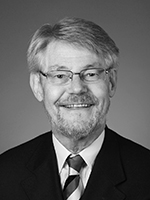 Erik Magnus Boe was born in 1943. He graduated as cand.jur. from The University of Oslo in 1970. His doctoral thesis from 1979, “Distriktenes utbyggingsfond - En kritisk rettslig/rettssosiologisk studie av DUF’s generelle forvaltningsrettslige stilling” (Oslo 1979), was accepted for the degree of doctor juris in 1980. The thesis deals with general aspects of administrative law and of legal reasoning as well as with the relationship between legal studies and sociology of law, applied on a public body (DUF) entrusted with power to convey financial support to the business community for the purpose of developing marginal regions in Norway. The work on the thesis commenced when Boe was employed as assistant professor at The University of Tromsø, Institute of Social Science, during the period from 1972 to1976. In 1986 Boe was appointed as professor of law at The Law Faculty, University of Oslo, with a particular duty to teach Public Law.

Among his posts at The Law Faculty in Oslo Boe has been vice depute at Institute of Public Law from 1992 to 2000, and in charge of The Board of Education and Exams from 1995 to 1999. Boe represented The Law Faculty when The University of Oslo in 1996 established and carried out common scholarly ground for freshmores as well as additional studies dealing with main aspects of legal science (“examen facultatum”). His sabbaticals abroad has been with New South Wales University, Sydney, Columbia University, New York, Stanford University, California, University of Europe, Firenze, and The Law Faculty, Copenhagen.