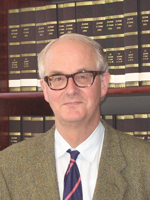 As Director General he was the Norwegian representative to the Committee of Senior Civil Servants on Legal Matters in the Nordic Council of Ministers (1995-2008) and to the Council of Europe’s Steering Committee on Legal Cooperation (CDCJ) (1996-2008), chairing the latter 2003-2005.

Professor Backer’s current major field of research is the preparation and drafting of legislation, emphasizing the need to see legal rules and questions from the perspective of the legislator rather than the application of current law.

He retains his interest in several fields of law where he has formerly done research work. In environmental law and administrative law his main works are Naturvern og naturinngrep. Forvaltningsrettslige styringsmidler [Nature Conservation and Encroachments in Nature. Remedies in Administrative Law] (Oslo 1986, dissertation) and Innføring in naturressurs- og miljørett [Introduction to Natural Resources and Environment Law] (4th ed., Oslo 2002). He has been responsible for the discipline of civil procedure and has published Rettslig interesse for søksmål, skjønn og klage [Standing in respect of Civil Lawsuits, Judicial Survey and Administrative Appeal] (Oslo 1984) and in English The Norwegian Reform of Civil Procedure (51 Scandinavian Studies in Law (Stockholm 2007) pp. 41-75). In child Law he has published Barneloven. Kommentarutgave [The Children Act. A Commentary] (2nd ed., Oslo 2008).