UiO The Faculty of Law Department of Public and International Law
Main navigation
Back to uio.no
Sub navigation Menu
Research > Research projects > New Perspectives in Constitutional History > Book-projects > The pre-school of freedom. Professor Schlegel and apprenticeship of the Eidsvoll-men in Copenhagen

The pre-school of freedom. Professor Schlegel and apprenticeship of the Eidsvoll-men in Copenhagen

This project studies the scholarship and activities of the jurist Johan Frederik Wilhelm Schlegel (1765-1835). Schlegel has long been neglected in constitutional history, but as is proven in recent research, he was a key idea monger and promoter of the intellectual processes of the period up until 1814, see Mestad (2008) and Michalsen (2010). 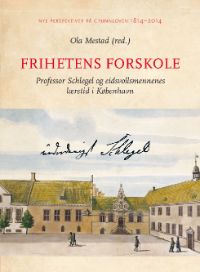 Schlegel belonged to the liberal elite during the Danish-Norwegian absolutist era. Having experienced an extensive research and educational journey at the end of the 1780s , including studies in Göttingen , he was from 1789 Connected to the Faculty of Law at the University of Copenhagen. Through the 1790s he was the leading legal and philosophical constitutional law scholar of Denmark-Norway. His book Naturrettens eller den almindelige Retslæres Grundsætninger, which 1st edition came out in in 1798 and 2nd edition in 1805, was of great importance as a textbook for several generations of legal civil servants. Schlegel's book provided liberal general conceptions of the European Enlightenment to the Danish- Norwegian lawyers. This dissemination was also part of the substantial reception of Kant's critical philosophy that was part of the Danish-Norwegian kantian movement in Copenhagen during the 1790s. In the same year as Schlegel wrote  Naturret he also published  the legal journal Astraea (1797-1805), which was the first Nordic legal journal.

In the book and the journal, a series of constitutional themes of the time were presented. Most of the 26 lawyers who were to sit in the National Assembly at Eidsvoll in 1814 had been in contact with Schlegel's work at some point and many of them had followed his lectures in constitutional law and natural law at the Law Faculty in Copenhagen. Schlegel's influence can be traced in different ways, and all considered, he is one of the most underrated figures in 1814 history. The project aims at providing a new overall assessment of Schlegel, his intellectual qualities in the tradition of European natural law and his importance for the elaboration of the Constitution.

The project is part of the New Perspectives in Constitutional History project (NFR / 1814 project). The project builds on established interdisciplinary research and is aimed at different forms of communication.The project is organized as research and into a series of seminars. The project has resulted in an anthology published by PAX Forlag in 2013.

The project is an interdisciplinary collaboration between lawyers and historians from the Universities of Turku, Copenhagen, Odense, Bergen, Oslo and NTNU.