The project is part of the 2014 commitment of the research team Law, Society and Historical Change at the Faculty of Law in Oslo. The project takes place in collaboration with lawyers, historians, political scientists and scholars from other disciplines, both in Norway and abroad. A total of around 70 researchers are involved and contributing to the project. 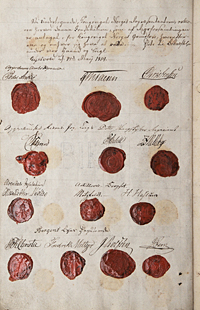 The main objective of the project is to hold seminars and publish a series of six anthologies on new perspectives on the Constitution. The books will be published by the spring of 2014. The project is financed by the Norwegian Research Council - "GRUNNLOV programmet".

The seminars and anthologies are centered around a new perspective on the Constitution which has not previously been examined with similar consequences.

The six sub-projects resulting in six anthologies are:

The project's objective is to produce and communicate research that will provide new perspectives on the Constitution and its history. The aim is to work out new legal research and historical dimensions of Norwegian constitutional history in the context of international research.

The project is organized in a series of seminars which will result in six anthologies/books. So far, four books in the series have been published by PAX Forlag.

The project is part of the Norwegian Research Council's commitment to research and knowledge on the importance of the Constitution for the development of Norway as a democratic state - the Norwegian Constitution Bicentennial of 2014 (GRUNNLOV).

The project builds on established interdisciplinary research and is aimed at different forms of communication. The central element of the interdisciplinary research is to utilize already existing forms of cooperation, partly between legal researchers at different faculties, partly between Norwegian and international researchers.

The project is led by Professor Dag Michalsen who is also head of the research team Law, Society and Historical change at the Faculty of Law in Oslo.