"Constitutionalism before 1789. Constitutional arrangements from the High Middle Ages to the French Revolution" by Jørn Øyrehagen Sunde (ed.). 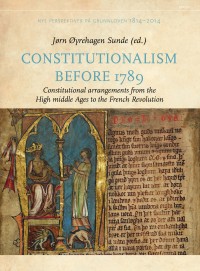 Constitutional reasoning and practices developed in varied places such as the city-states of Flanders, the kingdoms of Norway and England, and the Iberian Peninsula. They continuously influenced state formation and politics in countries such as the Scandinavian kingdoms, as well as being the object of scholarly studies in Scotland, Germany and France. As a result, philosophers of the Enlightenment and the revolutionary movements could draw on a multitude of practices and theories during the 18th century.