The Nordic Journal of Human Rights autumn issue includes a legal commentary on the Habré judgment, an article on non-discrimination jurisprudence in the European Court of Human Rights, an article on Danish asylum law and children’s rights, as well as two articles on the subject of proselytisation and human rights. Articles are available from Taylor & Francis for download. 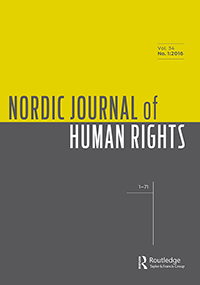 Sofie Høgestøl provides a timely, concise assessment of the impact of the recent Habré judgment. In May 2016, Habré became the first former head of state to be convicted for crimes against humanity before the domestic courts of another country. He was tried and convicted by the Extraordinary African Chambers (EAC) in Senegal, a criminal court created under the auspices of the African Union (AU). This legal development article considers the importance of the victim driven efforts that led to the prosecution of Habré and briefly explores whether the EAC model could be employed elsewhere.

Caroline Adolphsen considers the rights of asylum seeking children in Denmark in light of new legislation proposals. Adolphsen provides an overview of the asylum seeking process for minors in Denmark, and argues that the recent legislative reform proposals do not conform to the CRC’s principle of the best interest of the child and will undermine children’s right to health.

This issue also features two articles on the subject of proselytisation and human rights, albeit from two different perspectives and in two different countries.

Michael Hertzberg shows the importance of political alliances and the socio-political aspects of the proselytisation legislation reform efforts in Sri Lanka between 2003 and 2008. Hertzberg’s article is an in-depth study of the policy process of the anti-conversion bill in Sri Lanka, which saw the adoption of international and national legal norms in the formulation of the bill, as well as an effort to find a common rhetoric on the subject of proselytism which could appeal to several religious groups, including minority groups. This article will explain how this came about, and why the political and religious context of Sri Lanka had such a huge impact on the legislative reform process and why the anti-conversion bill never reached parliament.

Sofie A. E. Høgestøl – ‘The Habré Judgment at the Extraordinary African Chambers: A Singular Victory in the Fight Against Impunity’, pp 147-156.

Kristin Henrard – ‘The European Court of Human Rights, Ethnic and Religious Minorities and the Two Dimensions of the Right to Equal Treatment: Jurisprudence at Different Speeds?’, pp 157-177.