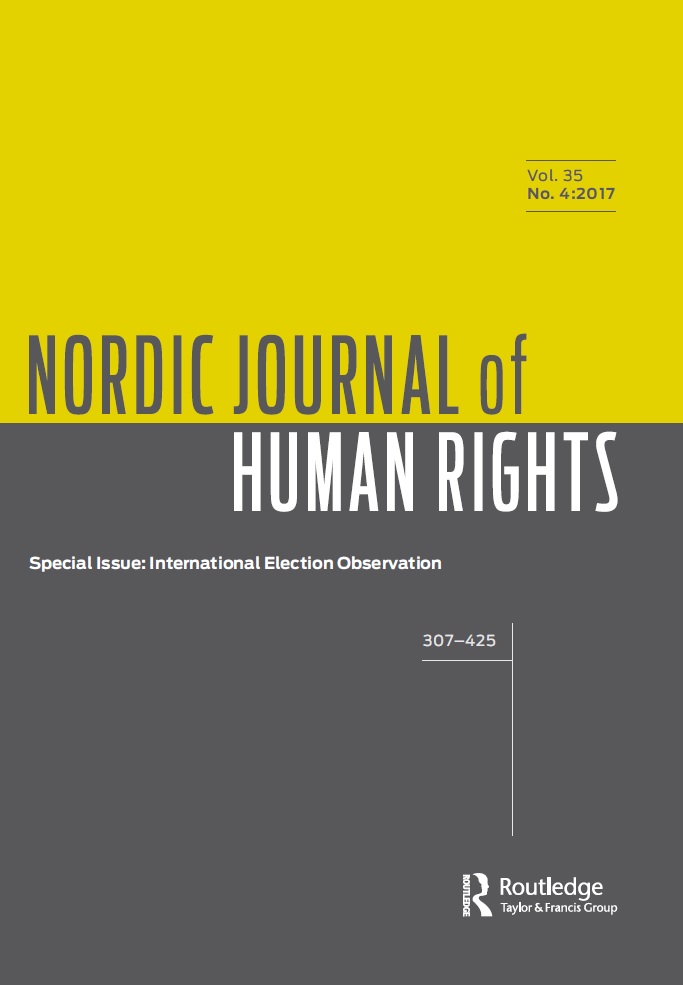 The Winter 2017 issue of the Nordic Journal of Human Rights is now available online.

This Special Issue highlights international election observation (IEO) as a field of human rights action, and addresses empirical experiences that need further examination. As pointed out by several articles in the issue, IEO is now firmly defined with reference to international human rights law, with international human rights courts and institutions even applying reports of IEO missions in their deliberations and decisions, in some cases. This makes IEO an important field for human rights research. The Journal therefore invited scholars to submit articles by a call for papers. The articles published are selected from the response to the call and represent the interest in the academic community to address topical issues of IEO.

In the first article, ‘International Observer Recommendations and the UN Human Rights Mechanisms: Toward a More Robust System of Global Accountability on Democracy and Human Rights’, David J Carroll and Avery Davis-Roberts argue that evidence produced by IEO missions should be more systematically used by human rights treaty bodies, and in human rights supervision, e.g. the UN Universal Periodic Review. They argue how this may be of great value in addressing the global trend towards shrinking political spaces for human rights promotion. Evidence produced by IEO missions is, in other words, important in framing human rights accountability in emerging as well as established democracies.

A trend in IEO is to address the act of voting in broader social and political context. Election results, some argue, are ‘pre-determined’ by the legal and political framework that constitutes or obstructs the level playing field. The fairness of election is dependent on elections as processes, the so-called election cycles, and the use of long-term observes manifests a growing recognition of the importance of seeing elections in context. Trust in the electoral bodies (so troubled in the above-discussed Kenyan elections) is indeed an important variable in assessing an election cycle. Therese Pearce Laanela addresses such contextual challenges to fair elections and the methodological implications of such challenges for IEO in ‘Beyond the Checklist: Addressing New Challenges in Election Observation Methodology’.

Kåre Vollan in ‘International Election Observation and Standards for Systems of Representation: A Critical View’ asks if international standards for democratic elections present particular features and norms for electoral systems. He finds that apart from regulating equality of the vote among all citizens (with some legitimate exceptions), there is little guidance on the standards of systems of representation, e.g. on the differences produced by proportional versus majoritarian models of election. The choice of election models, he argues, has important consequences for assessing the fairness of elections, an issue not well enough addressed by the IEO community.

IEO is carried out by different types of regimes, even authoritarian and quasi- democratic states, while it was originally undertaken and conducted by institutions in established democracies, or institutions of collaboration among such states. This demonstrates that states see the political benefits of taking part in IEO, although it may also trouble the legitimacy and credibility of IEO missions. A related issue is whether the established democracies advancing IEO also accepts observations of their own elections. In ‘Mapping Legislation for Citizens and International Election Observation in Europe: A Comparative Analysis on the Basis of OECD/ODIHR Reports’, Michael Lidauer, Armin Rabitsch and Iris O'Rourke discusses this important topic with reference to practices of European democracies. Do democracies with high levels of electoral integrity allow and encourage election observations mission in their own elections? Have they introduced legislation and other provisions that make IEO possible? This, for sure, is important for the legitimacy of IEO, and for the continued use of data from IEO missions by human rights bodies who would rely on equal treatment of states in using IEO information in their monitoring functions.

An issue often neglected in the IEO discourse is the access of persons living with disabilities to electoral process as well as elected office. In the article ‘Disability Rights and Election Observation: Increasing Access to the Political Process’, Virginia Atkinson, Rebecca Aaberg and Steffan Darnolf examine guidelines and checklists employed by IEO missions and assess to what extent the IEO address disability rights as a right to be included, and how this field of democratic equality can be improved.

To what extent do IEO address the prevailing comparatively low levels of women represented in elected bodies, and do they make recommendations on this critical issue? In ‘Gap for Improvement: Election Observation and Political Representation of Women in the OSCE Region’, Svetlana Chetaikina and Vasil Vashchanka find that there is a growing trend of reporting on women's participation and representation, although they find that the language used in IEO reports are lacking in consistency and they are too often ‘weakly worded’.

Election observation is, as noted, not undertaken just by international teams and agencies. It may, in fact, be argued that even more important than IEO is citizen election observation and monitoring. Citizen monitoring groups play essential roles for many reasons. They are exceeding international observers in numbers, and hence, have a wider national coverage. They also have local contacts, knowledge and understanding that is essential in playing critical and constructive roles in the preparatory and implementing phases of an election. They often have comparative local and national knowledge by observing and monitoring consecutive elections, and they contribute important information to IEO missions. In ‘Domestic Election Monitoring and Advocacy: An Emerging Research Agenda’, Max Grömping reviews the academic literature on citizen monitoring and suggests a research agenda for future research.

This issue aims at inspiring such future, evidence-based research on IEO. In designing this Special Issue, the NJHR wanted to frame IEO as an important field of human rights practice in need of further empirical research and theoretical reflection. In the work on this issue, we appreciate the support of and collaboration with NORDEM (Norwegian Resource Bank for Democracy and Human Rights). NORDEM has since 1993 provided observers to election observation missions all over the world, and has contributed to developments in observation methodology and the management of observation missions. NORDEM's expertise and network was invaluable in identifying topics and contributors to this issue. It is our hope that the articles published here may have a practical value and impact for all those engaged in this international human rights work.

- Excerpt from the Editorial Note

Svetlana Chetaikina and Vasil Vashchanka – ‘Gap for Improvement: Election Observation and Political Representation of Women in the OSCE Region’, pp 392- 406