From Nollywood to Norway

Nigerian films will be in the spotlight for the very first time at Oslo's biggest film festival, the Films from the South Festival. Researchers from the MIGMA project at the Department of Criminology and Sociology of Law have been central in the film selection for the festival program. 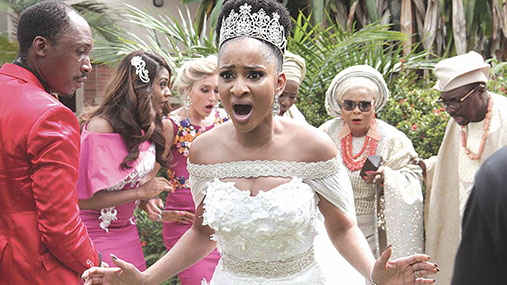 The popular film "The Wedding Party" by Kemi Adetiba is one of the films screened at the festival. Photo: Published with permission from the Films from the South Festival.

- In Norway, Nigeria is often associated with corruption, organized crime and Boko Haram. We wish to present a more nuanced picture of a diverse and exciting country, says Erlend Paasche, postdoctoral fellow at the MIGMA project. The selected films all highlight contemporary Nigerian and African culture in different ways. Paasche thinks of the collaboration between UiO and the film festival as an excellent way of communicating academic perspectives to a wider audience.

- We have received many requests about Nollywood and Nigerian films throughout the years, but this year the timing felt right, mainly because of the collaboration with MIGMA, says Johanne Svendsen Rognlien, marketing and communication coordinator at Films from the South Festival.

- In order to prepare the audience for what they will see, we have introductions to the Nigerian films by researchers from the MIGMA project. Tunde Kelani, who is one of Nigeria’s most famous film producer, will also be doing Q&A at the screenings of his film “Maami”. In addition, we have chosen to show a documentary film to give the audience a better understanding of the context, she continues.

The film industry in Nigeria, popularly termed Nollywood, is one of the world’s largest film industries, following Bollywood, with Hollywood far behind in third place. The average budget for a Nollywood production is around 10 000 dollars, but the films selected for this festival are costlier productions. Paasche explains that there has been a change in Nollywood in the last couple of years.

- Nigerian film has gotten a different and larger audience, both in Nigeria and Africa, but also outside the continent, he says. He points to larger budgets and new technology as the main forces behind this development.

The films have been carefully selected together with Paasche. Including the whole range of Nigerian film has been an important objective in the selection process.

- We had to make some hard choices. The biggest challenge has been how to show movies on the big screen that originally were made for TV, Rognlien explains. She emphasizes that they have chosen films that, at first glance, might look like ordinary action or drama films, while shedding light on issues like equal rights, sexual liberation and class differences.

Along with the film screenings, MIGMA will host a seminar called "Crime goes to the movies: The case of Nollywood” at the Department of Criminology and Sociology of Law. Two of the leading researchers on Nollywood, Senayon Olaoluwa from the University of Ibadan and Alessandro Jedlowski from the University of Liège, will be presenting at seminar.

The festival is from November 9th to November 19th. You can find the full program at the Films from the South Festivals home page.