This is the first edition of a handbook in Norwegian hull insurance based on the Norwegian Marine Insurance Plan 1996 Version 2007 with a comparative look to English marine insurance. The authors are Trine-Lise Wilhelmsen and Hans Jacob Bull, both professors at the Scandinavian Institute of Maritime Law. 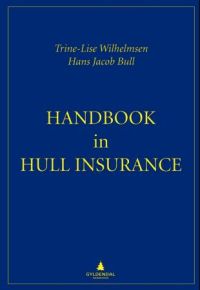 The purpose of the book is partly to provide a handbook for the marine insurance market, both in Norway and in other countries, partly to serve as part of the main literature in the new course in Marine Insurance that was introduced at the Scandinavian Institute of Maritime law during the spring of 2007.