UiO The Faculty of Law Scandinavian Institute of Maritime Law
Main navigation
Back to uio.no
Sub navigation Menu
Research > Publications > Books in English > Jurisdiction over Ships: Post-UNCLOS Developments in the Law of the Sea

Jurisdiction over Ships: Post-UNCLOS Developments in the Law of the Sea

The book analyses international law developments in shipping since the adoption of the UN Convention on the Law of the Sea (UNCLOS) in 1982. 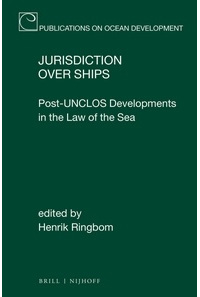 The Convention’s rules on the rights and obligations of flag states, coastal states and port states, have by and large been accepted and adhered to by states, but the legal regime for the oceans is neither complete nor static, nor was it intended to be so.

New issues have surfaced while old issues have changed their character. Developments in law and practice have already resulted in some divergences between the jurisdictional scheme outlined in UNCLOS and how states in reality exercise their jurisdiction over ships.

In this book, 18 leading academics in the field study a number of such developments in more detail, providing a practical guide to the state of the law at present while at the same time offering insights into how international law develops in this field.

All interested in the international regulation of shipping and the development of the law of the sea.

Oslo Law of the Sea Forum

In 2013, the Institute started a network for law of the sea research, OSLOS. This book is the first publication emanating from that initiative. It is based on presentations and discussions held at a meeting in Oslo in June 2014. Currently a follow-up seminar is being planned for June 2016, with a focus on new uses and challenges relating to the seabed.

Jurisdiction over Ships:
Post-UNCLOS Developments in the Law of the Sea
Edited by Henrik Ringbom, University of Oslo
2015, Brill, Nijhoff: Publications on Ocean Development vol. 80