Thor Falkanger - The seller’s right of stoppage when bills of lading are issued/
Hans Jacob Bull  - Natural damage insurance: the Norwegian model and current efforts to improve it/
Henrik Bjørnebye  - The impact of the third energy market package on national resource management /
Lauri Railas  - Going the Nordic way - an alternative to English hegemony /
Trine-Lise Wilhelmsen   - Loss of hire insurance when the damaged vessel is substituted.
What does loss of hire insurance cover? /
Trine-Lise Wilhelmsen  -  Marine insurance for intervention by State power   – The Nordic perspective /
Trond Solvang - From the role of classification societies, to theories of norms and autonomous ships - some cross-disciplinary reflections

Partner at “Sokolov, Maslov and Partners”

Member of the Academic Advisory Group of the IBA Section on Energy,

The English doctrine of indemnity for compliance with time charterers’ orders – does it exist under Norwegian law?
Trond Solvang, Professor dr. juris
Scandinavian Institute of maritime Law, University of Oslo

Use of armed guards onboard Norwegian vessels and the use of force
Stig André Kolstad, LLM, Senior adviser
Royal Ministry of Trade and Industry Maritime Department, Norway

This edition of the yearbook is dedicated to Professor Hans Jacob Bull on the occation of his 70th birthday in August 2011. His personality and attitude have had a strong influence on the Institute during his long "captaincy". An overview of his many books and articles you will find in the bibliography included in this yearbook, that contains the following articles:

When pirates capture the cargo
Trine-Lise Wilhelmsen, Professor and Director of the Scandinavian Institute of Maritime Law University of Oslo

Marine insurance regimes and their impact on shipping competition
Trine-Lise Wilhelmsen, Professor and Director of the Scandinavian Institute of Maritime Law, University of Oslo

The company’s duty to provide CAR-insurance under a fabrication contract: What is the situation if the insurer goes into bankruptcy?
Professor Hans Jacob Bull, Scandinavian institute of Maritime Law

The Athens Regulation is heading into harbour – The EU on the point of regulating liability for maritime passengers
Jens Karsten, LL.M

The end of the shipping pool as we know it?  – EC competition law and the legality of shipping pools 189
Assistant Attorney Maria Hempel, Nordisk Skibsrederforening

The obligations and liablility of the shipper under the uncitral project
Professor Dr. Juris Hannu Honka

The charteresr's ("befrakter's") right to limit his liability in respect of a claim from the shipowner for damage to the vessel – scandinavian and english law
Professor Dr. Juris Trine-Lise Wilhelmsen

Reinsurance contracts. Application of the law, the reinsured's duty of disclosure and the reinsurer's obligation to indemnify the reinsured
Research fellow Kaja de Vibe

Precedent, travaux preparatoires, and the use of foreign law in English court practice: the JORDAN II
Queen's Counsel Timothy Young

The scope of liability in charter, parties – an introduction
Research fellow Sverre Ellenes

You are welcome, but… – Places of Refuge and environmental liability and compensation, with particular reference to the EU
Research fellow Henrik Ringbom

Free Movement – A Threat or an opportunity? A view on nationality requirements for the ship’s master
Research fellow Mikaela Björkholm

Applicability of the prompt release procedure of the UN Covention on the Law of the Sea of 1982 in matters of prevention, reduction and control of pollution from vessels
Researcher Ph.D Heiki Lindpere

Marine oil spills: The responsibilities of the shipping industry regarding preparedness and response
Gunnhild Storbekkrønning Andersen

The distinction between one and more than one insured event
Professor dr. juris Trine-Lise Wilhelmsen

The end of a long saga?
Christoph Jacobs

Maritime Liens on Cargo: A Survey of the Provisions in the Norwegian Maritime Code
Thor Falkanger

Issues of marine insurance. Misconduct of the assured and identification
Trine-Lise Wilhelmsen

Part I: Maritime Law
Mortgages on ships according to norwegian law
Thor Falkanger

Petroleum investments in russia: are there grounds for revising the preference for production sharing?
Guiditta Cordero Moss

Part IV: Energy Law
Structuring of the electricity market - a study in the regulation of the coordinating grid functions
Ulf Hammer

Direct action against subcarriers under the c.m.r convention
Anette Jahr

The adoption of the production licence directive
Finn Arnesen

Carriers and subcarriers of goods by sea
Per Vestergaard Pedersen

Termination of the right of stoppage in transit under the maritime code
Svante O. Johansson 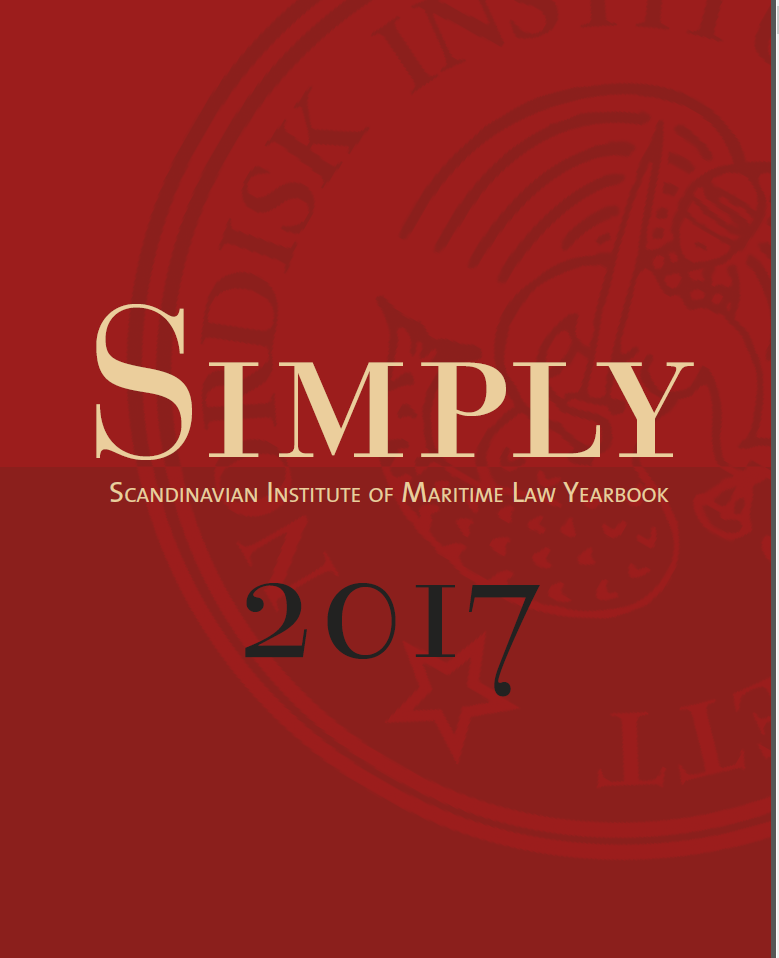 SIMPLY can be ordered from  Bokbyen.no - The Norwegian Book Town.
Read more about how to order singel issues and subscription with several options.