Can you make a difference in the world while gaining practical skills and deepening understanding? The students of the Human Rights in Practice course get the opportunity to try, in a new course approach where they work towards justice. 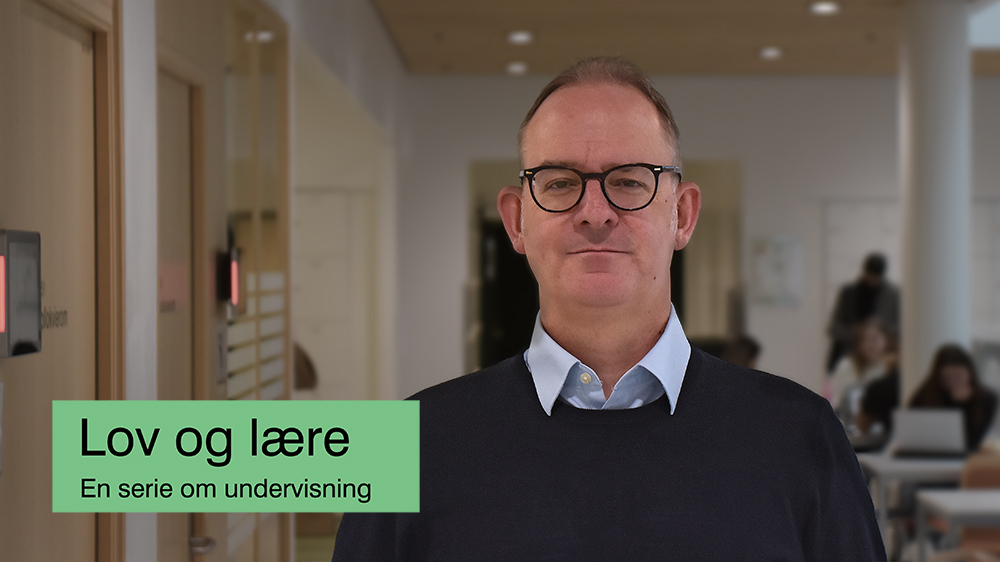 Peris Jones is impressed over the students' enthusiasm and creativity in the Human Rights in Theory and Practice course. (Image: Egil Jahren @ UiO)

In the article series Lov og Lære you meet teachers with different approaches to legal teaching. If you are a teacher yourself you may find others’ experiences useful, and you may perhaps find inspiration for your own teaching.

“They got into the idea immediately,” says a laughing Peris Jones, who teaches the Human Rights in Practice course. He recounts when, in the spring of 2021, he introduced the new teaching plan for the course where students get to create their own “mini-NGO” and work for human rights implementation in practice.

“I was both excited and a little worried beforehand,” Jones says. “But I was surprised at how well the students took it all in their stride, not to mention how engaged they became.”

Around the world, tireless work is being done to secure access to fundamental human rights. Non-governmental organizations (NGOs) are among those who participate, in an area where there are plenty of challenges - practical, cultural and political.
One of these organizations is Scholars at Risk, which works to protect academics in countries where democracy and freedom of speech are under threat. They also contribute to Peris Jones’ course, providing primarily real cases for the students to work on, and some expert input.

“The cases concern imprisoned academics, and the students work to increase awareness, put pressure on the authorities, and hopefully contribute to the eventual release of the academic in question,” Jones explains. “This is real life encounters, so the students probably feel a certain responsibility in their work.”

The students are divided into groups, and each pick a case from a list provided by Scholars at Risk. They have the responsibility of dividing tasks and roles within the group, after initial seminars about human rights practice and how to organize advocacy work.

“They have to create and implement a campaign, initiative or other activity, where the students themselves pick the methods and tools,” Jones says.

The groups have to make decisions on a series of questions: who will lead the group? Who takes responsibility for legal research and political context surrounding the case? Who should the campaign be directed at, which persons should be addressed? What methods and which channels should be used? What has already been done?

“In many cases, the students choose tasks and methods based on their personal experiences and interests, knowledge and country background,” says Jones. “The one with the most social media experience will take on the task of creating a digital platform campaign, for example. The students, of which many are international, also use their networks to establish useful relationships. One of the groups, for example, managed to establish contact with the Supreme Court of India.”

The students use many different methods to seek to create impact and increase public attention. They create social media campaigns, videos, podcasts, panel debates, artwork, photograph exhibitions, letter writing, and write think pieces. In addition to this comes the “legwork”: calling around, getting the right persons engaged, connecting with those who are willing to listen or help.

“The students have shown unparalleled creativity,” Jones says. “We give them a kind of template, but every case requires a different approach. Scholars at Risk and I give guidance and support, but they do the whole campaign themselves.”

At the end of the semester, the groups turn in a report that Scholars at Risk use in their continuing work.

A big task with no clear-cut solution

Jones’ course is part of the Masters’ degree Theory and Practice of Human Rights at the Faculty of Law, University of Oslo.

“The course name alludes to practice, so I thought we should strengthen the practical elements,” Jones answers when asked about why he created the new course plan. “It’s also based in changes at the Faculty, where to a larger degree it is legitimate to experiment with different forms of teaching. This has been especially pronounced after the Centre on Experiential Legal Learning (CELL) was established, which encourages innovation in teaching.”

Jones does not hesitate to call the program a success.

“The students get to experience how NGOs organize their work. Perhaps most importantly, they get involved with real individuals and their fates. They are given a human face to theoretical knowledge, and gain a new understanding of what human rights mean in practice.”

Nils Alexander Alwon, one of the students who took the course in the spring of 2022, has in collaboration with the rest of his group worked for the release of two imprisoned students in Belarus.

“The freedom and responsibility we were given to organize ourselves and solve the task was a positive experience,” Alwon recounts. “But it is a big task to take on, where the solution isn’t a given from the get-go, and where it is uncertain whether you will achieve any changes at all.”

Jones acknowledges that activism is hard work. The students use much time and creativity in the search for possible solutions to the different challenges of each case.
“Usually you will achieve gradual and small changes over time and this provides valuable skills about understanding the nature of impact and change in human rights,” Jones says. “But an academic was actually acquitted after the spring semester of 2021, the Egyptian master student Patrick Zaki.

Jones does not want to speculate as to the extent to which this this was due to the students’ efforts, as many factors contribute to most changes, but he has no doubt that it played some role.

“As Zaki says himself, upon release, it is meaningful to imprisoned persons to know that someone is fighting for you. All support matters, regardless of whether it leads to release from prison or not,” he concludes.

The article series is primarily published in Norwegian; this article has been translated to English from the original Norwegian text.