A course for all, on Master’s level, a course that’s absolutely free, web based and available for completion on your own PC, a course that takes max two hours of your time weekly, for four weeks, highly relevant topic: Mass Migration and Human Rights – Legal and ethical dilemmas, world class scholars, short lectures, 40 different steps, videos and texts, all in English 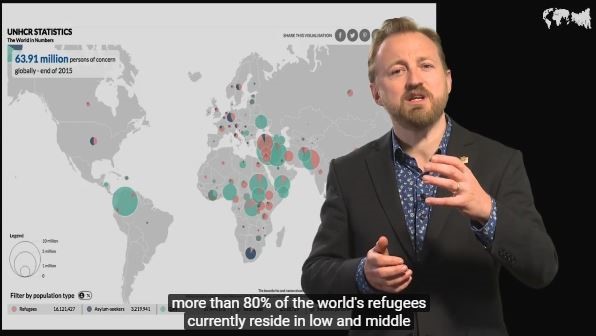 Research Director at the Raoul Wallenberg Institute, Lund University, Thomas Gammeltoft-Hansen, is one of many experts lecturing. (still from the MOOC)

Initiator, NCHR director Inga Bostad mobilized the world wide scholarly network, the  Association of Human Rights Institutes – AHRI – which lead to the availability and inclusion of the world’s leading scholars in the fields of migration and international law.

The UiO and its Faculty of Law are also among the essential supporters. Additionally, the NCHR has asked Doctor Ingvill T Plesner of the Norwegian Center for Studies of Holocaust and Religious Minorities to create the course, engage lecturers and helm the actual production.

Both Bostad and Plesner contributes in the videos, Bostad as an ethichs lecturer, and Plesner as an interviewer. 20+ experts participate in the 40 singular steps, half of them part of the AHRI network. Additionally, the awarded Norwegian documentary filmmaker, Karoline Frogner contributes on a pro bono basis, with some film sequences where children in Norwegian reception centres for asylum seekers share their histories. And further, the MOOC presents sequences from the awarded documentary «69 minutes of 86 Days» by Egil Håskjold Larsen.

A great variety of dissemination methods

The course, in four modules, employs a variety of dissemination methods, including documentaries, video lectures, interviews and texts. And the course opens for interactivity, including experienced web hosting that will offer further scholarly guidelines. Professor Stener Ekern of the NCHR is in charge of this guidance.

The second module deals with Human rights and root causes of mass migration. In this module, one examines these causes with particular emphasis on North Africa and the Middle East, in particular Syria and Lebanon. The third module deals with the questions of Access to asylum - in theory and practice.  The fourth takes into consideration the long term consequences and challenges of integration.

The four modules are released consecutively on a weekly basis,

All four modules are closed down exactly one week later, on Monday, October 16th. This implies that one can view all four modules at once only in the final week, between October 9th and 16th.

How to join the MOOC