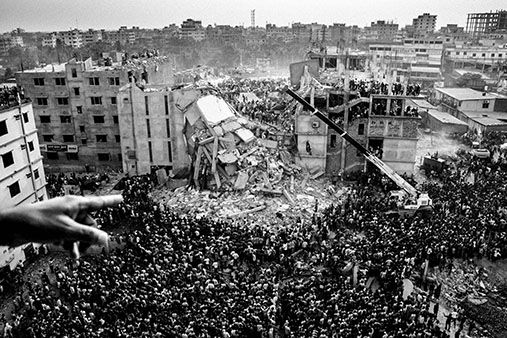 The collapse of Rana Plaza Factory in Bangladesh, in 2013. The death of more than 1,130 people drew worldwide attention to the poor working conditions in Bangladesh's garment industries, which provide cheap clothing for major Western retailers.

What is the legal nature of the role of corporations in the economic, social and political dynamics at the national and the international level? What are the consequences when such entities do not comply with international legal standards, of a hard or soft law nature? Is there a legal vacuum that allows them to operate on the international scenery profiting of an “all honors - no obligations” shield? If so, what are the tools that States are envisaging in their domestic context (legislation and judicial means), or in international law?

Yawning gaps in the assessment and enforcement of corporate responsibility for breaches of international law, a deep divergence in the application of the rule of law and considerable differences in labelling wrongful conducts, have led to significant roadblocks in providing effective remedies. This is particularly the case with regard to corporate conducts in conflict with human rights and environmental law, directly breaching international rules or their incorporation into a given domestic legal order.

In a nutshell, the present research project seeks to analyze existing gaps in the international legal system on the above issues, together with the on-going international efforts aimed at tackling them. Falling at the intersection of comparative company law and international human rights law, the present work intends to provide an answer to the question of actual and potential effectiveness of national remedies - versus the introduction of new international ones. The feasibility of the latter will be considered against the background of the potential role of international investment law and of the current negotiations of a Treaty on Business and Human Rights.

Ludovica Chiussi is a PhD candidate at the Norwegian Centre for Human Rights (Faculty of Law, University of Oslo) and at the School of Law of the University of Bologna.

Admitted to the Bar in 2016, Ludovica holds a Law Degree (LLM) at the University of Bologna (2013), and a Master in International Relations and Human Rights from the Italian Society for the International Organizations (SIOI). She has been a visiting student at the Pantheon Sorbonne University in Paris, conducting the research for her Master thesis at Columbia University.