A multidisciplinary project about the prevention, criminalisation and rehabilitation of foreign fighters in Scandinavia, headed by Sofie A. E. Høgestøl and Anna Andersson at the Norwegian Centre for Human Rights. 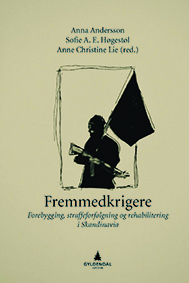 This research project addresses the challenges governments face in adopting measures to prevent radicalisation and terrorism travels, as well as the challenges in holding persons accountable for terrorism and war crimes and achieve successful reintegration of returned foreign fighters. These challenges are explored through an examination of preventive measures, criminalisation and rehabilitation models adopted by authorities in the Nordic countries, coupled with research findings from interviews with Nordic foreign fighters. The project is headed by Sofie A. E. Høgestøl and Anna Andersson at the Norwegian Centre for Human Rights, Faculty of Law, UiO.

In November 2016 the research project successfully organised the conference entitled Nordic approaches to foreign fighters with participants from the Scandinavian countries. The aim of the conference was to bring together early stage researchers to examine the phenomenon of foreign fighters from a multidisciplinary Nordic perspective, and was funded by the Norwegian Centre for Human Rights and Lovsamlingsfondet.

The book is relevant for academics, practitioners and students in various disciplines interested in the prevention, criminalisation, and rehabilitation of persons involved in terrorism and war crimes. Various researchers from universities and research institutions in Norway, Sweden and Denmark, within disciplines such as law, political science, philosophy, crisis management and social anthropology, will contribute chapters to the book. This book takes a broad, multidisciplinary approach to the challenges posed by foreign fighters in Scandinavia and seeks to contribute to the scholarly debate on foreign fighters.