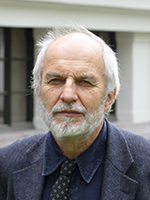 Aslak Syse (born 1946) holds a Bachelor of Arts Degree (1971), a Masters Degree in Medicine (1972), a Masters Degree in Law (1988) and a Ph. D. in Law (1996) – all from the University of Oslo. During the first 18 years of his career Syse practiced medicine, including seven years as Regional Medical Director for mentally retarded persons in Finnmark (the northernmost county in Norway), and two years as District Medical Officer in Mtoko District, Zimbabwe.

Syse joined the Department of Public and International Law in 1989, and was appointed Professor of Legal Sciences in 1997. He has been chairman for several Law Commissions.

Syse chaired the Norwegian Equality and Anti-discrimination Tribunal in the years 2006-2009. He was Director for the Department of Public and International Law in the years 2010-2013.

Throughout his academic career Syse has focused his research on the legal framework for the welfare state, drawing from his extensive experience as a clinical physician. He has published a series of articles and monographs on topics including: the legal status of persons with general learning disabilities; the concept of individual rights in the Welfare State, fairness, justice and the rule of law: the relationship between coercion and voluntary treatment in the field of psychiatry; the boundary between welfare judicial interference and interference according to criminal law; Anti-discrimination and other Human Rights issues as well as general norm analysis. Syse teaches primary courses in constitutional law, administrative law and welfare law as well as advanced courses in social and health law.

Could not retrieve publications from Cristin due to service timeout