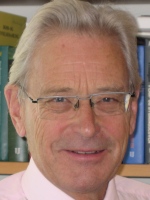 Hans Chr. Bugge (born 1942) is Professor of Environmental Law at the Department of Public and International Law, University of Oslo, since 1998. He holds a doctorate in regional planning from the University of Paris II (Doctorat de spécialité) (1972) and is dr.juris from Oslo University on a thesis on responsibility for pollution in Norwegian law (1998).

He has also worked extensively with development issues. From 1982 to 1991 he was Secretary General of Redd Barna (Save the Children Norway) running human rights and development projects in poor areas in Asia, Africa and Central America. 1986-87 he served as State Secretary (Deputy Minister) for Development Cooperation and personal advisor to Prime Minister Gro Harlem Brundtland in her work as chair of the World Commission on Environment and Development.

He has been vice chair of the board of the national Research Council of Norway, and Vice Dean for Research at the Faculty of Law.

From 2005 he chairs the Research group for Natural Resources law at the faculty of Law, which cover research in Energy Law, Environmental/Climate Law and Property Law.

He has written several books and a number of articles in the field of environmental law and sustainable development.