Worlds of Human Rights. The Ambiguities of Rights Claiming in Africa 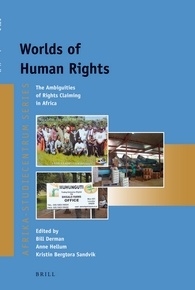 Through ethnographic field studies it situates claims-making by groups and individuals that have been subject to injustices and abuses, often due to different forms of displacement, in specific geographical, historical and political contexts.

It shows how existing relations of inequality, domination and control are affected by the opportunities offered by emerging law and governance structures as a plurality of non-state actors enter what previously was considered the sole regulatory domain of the nation state.