An essay presented at NCHR Master’s programme has become a full fledged academic article: It assesses the role of international human rights law in shifting state compliance and state behavior in relation to crimes of torture and enforced disappearances in Latin America. 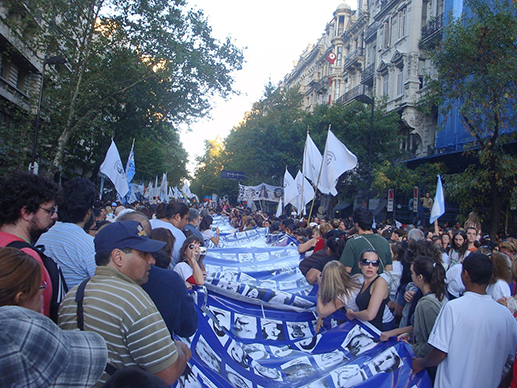 Flag with images of those who disappeared during a demonstration in Buenos Aires to commemorate the 35th anniversary of the 1976 coup in Argentina. By Banfield - Own work, CC BY-SA 3.0, https://commons.wikimedia.org/w/index.php?curid=14692978

This is how it is described, the paper that one of the NCHR Ist year masters students: Mateo Corrales Hoyos has published recently in Global Politics Review. Its full title: Addressing the Crimes of Torture and EnforcedDisappearances in Latin America: Achievements and Challenges from a Human Rights Perspective.

Based upon a student essay

The paper was based upon his Human Rights Law in Context essay last semester, and notes that Latin American states suffered from widespread crimes of torture and enforced disappearances during the second half of the twentieth century.

In the 1980s, the region has transitioned from ignoring international legal obligations, including human rights, to abiding by them. The paper displays empirical  evidence  on  how  different  international  and  regional  systems  have  aided domestic efforts to address crimes of torture and enforced disappearances.

Pressure alone can be insufficient

The main finding of this research is that the existing human rights system cannot sufficiently address gross violations of torture and enforced disappearances if it is left to either international or domestic forms of pressure. Instead, a complex interaction of treaties, case law, laws and state pressure at the international, regional and domestic levels are all necessary conditions to shift state behavior with respect to human rights.

The author, Mateo Corrales Hoyos is a Colombian Master’s candidate in Theory and Practice of Human Rights at the NCHR. He holds a master in Global Affairs and Policy from Yonsei University, South Korea. His current research interests are in human rights, peace processes in Latin America, international terrorism and transitional justice.